Lee
Since an early age I've been creating, building and modifying the world in which we live. Raised by some master crafters, I've learned so many skills they all seem to have blended together into a meta-skill. I'm a creative problem solver and a college educated analyzer of businesses and systems. I bring a broad perspective having lived and worked in the most rural settings to the most modern of locals, and I'm at home everywhere I go.
Demolition

Anatomy Of A Demolition – (Part 2: Setting Up The Job)

It was very important on this job to contain the dust we were going to create or release in the process of demolition.  We knew that would be taking down an old ceiling that had surely been there 70 years or more, and that there would be allot of black dust coming down.  We knew that there was a good chance that at some point in the past lead paint had been used in some layer of the apartment.  We knew that with kids living in the building and playing outside, we didn’t want dust from this demolition permeating the interior or exterior of the building.  We wanted to contain the dust and dirt, bag it up, and get it out.  We used dust traps, an air filter, and common sense to maintain a tight dust working environment.

(Part 3)  Will detail the beginning demolition in the walk-in closet/bedroom area. 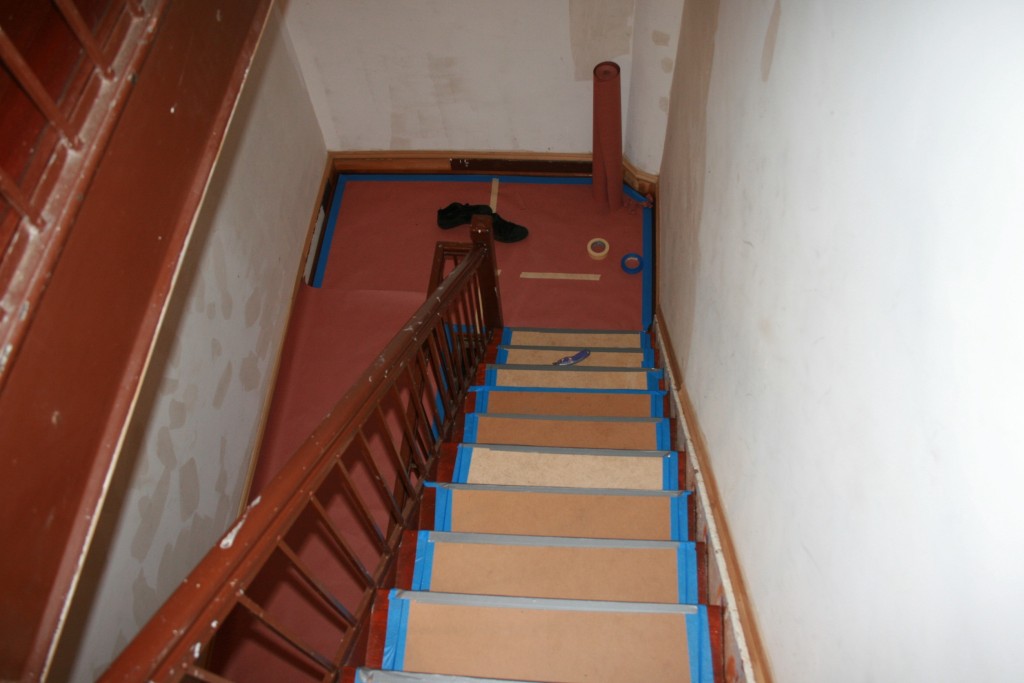 We were also preparing for the work that would follow the demolition. Huge piles of construction bags would be hiked down out of here, along with beams, tin ceiling, etc. Then tons of wood and sheet rock would be coming in as well. To protect the nice hardwood floors in the stairwell, we covered the floors with paper and the stairs with sections of Masonite and cardboard. 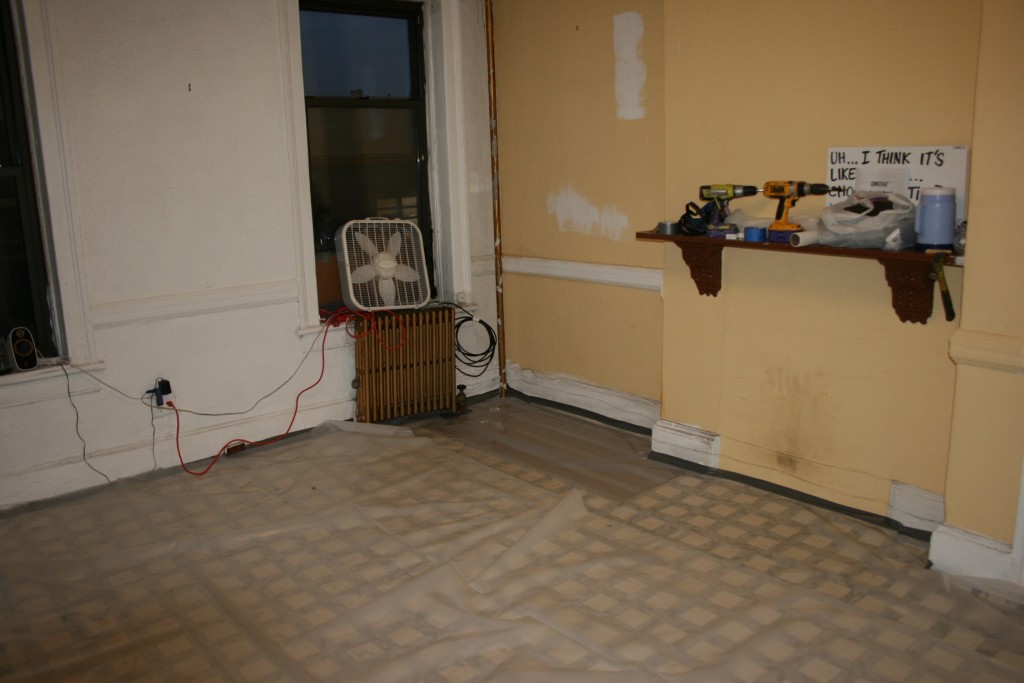 To help keep the dust from filtering down through the floor to the apartment below, we spread sheet plastic over the floors and duck taped the corners into place. 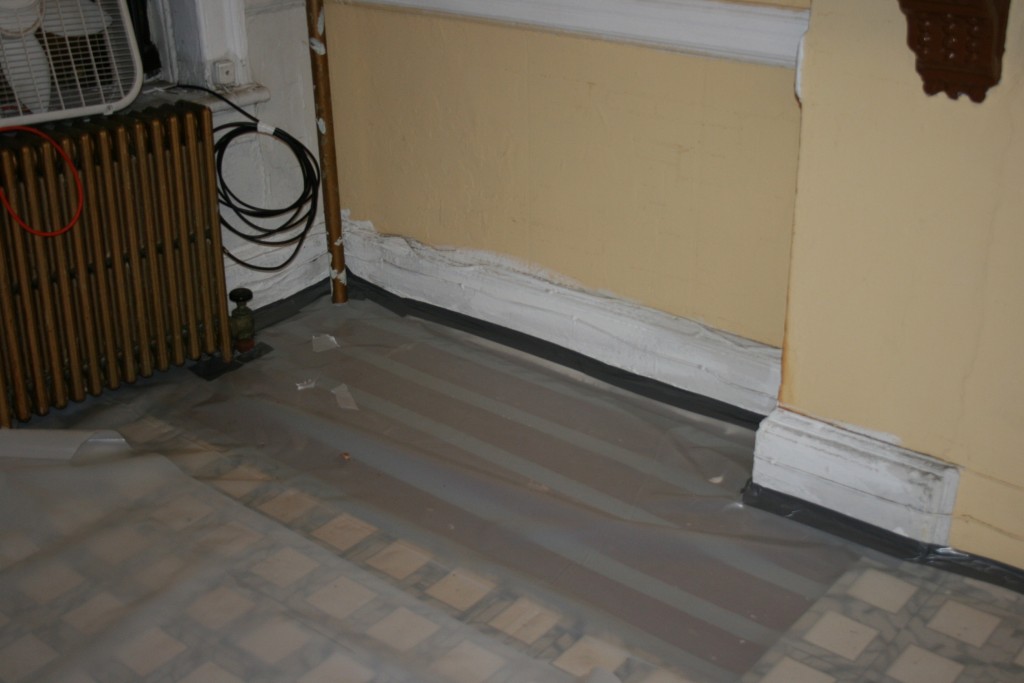 In this corner where the floor was particularly cracked, we taped up the cracks in the floor and around the pipes first, and then added plastic on top of that. 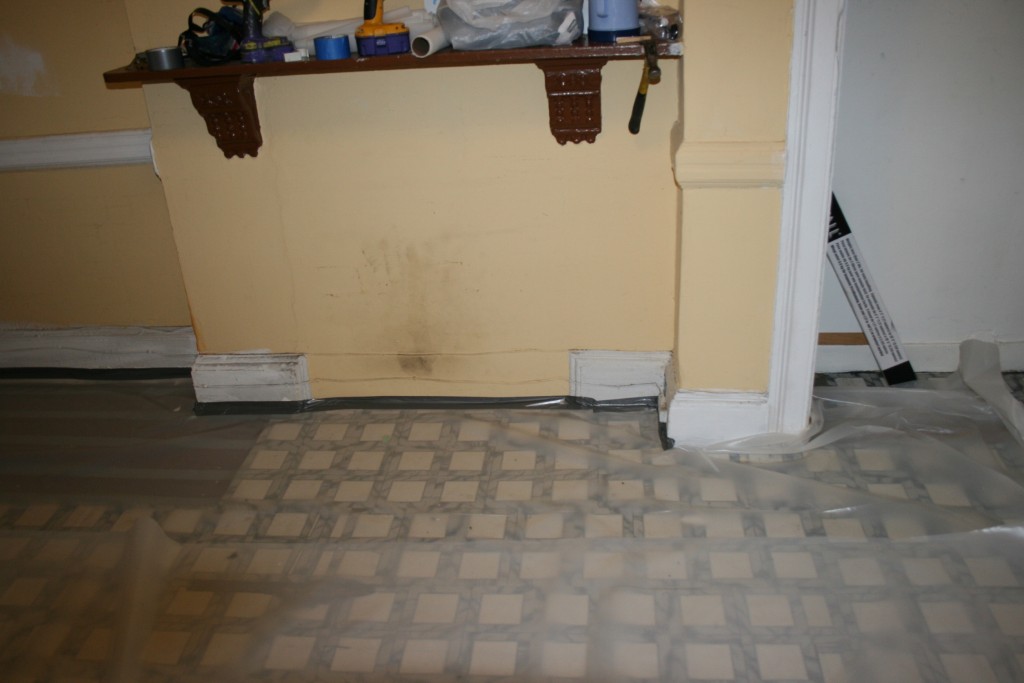 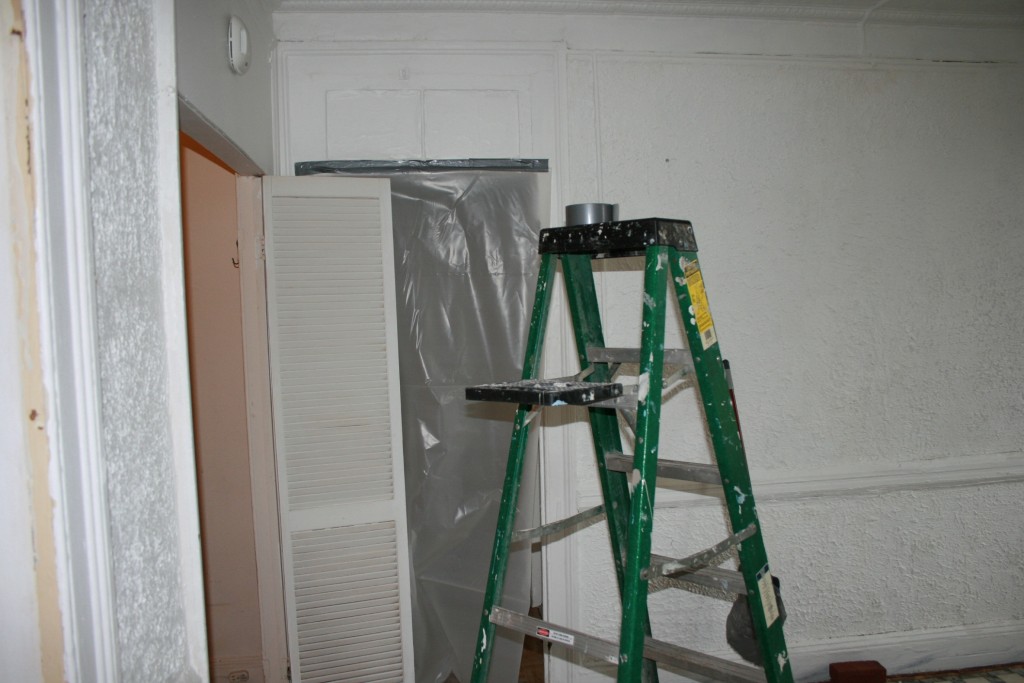 To help us create an airlock, to keep dust out of the stairwell, we closed off this entryway completely with plastic and duct tape. 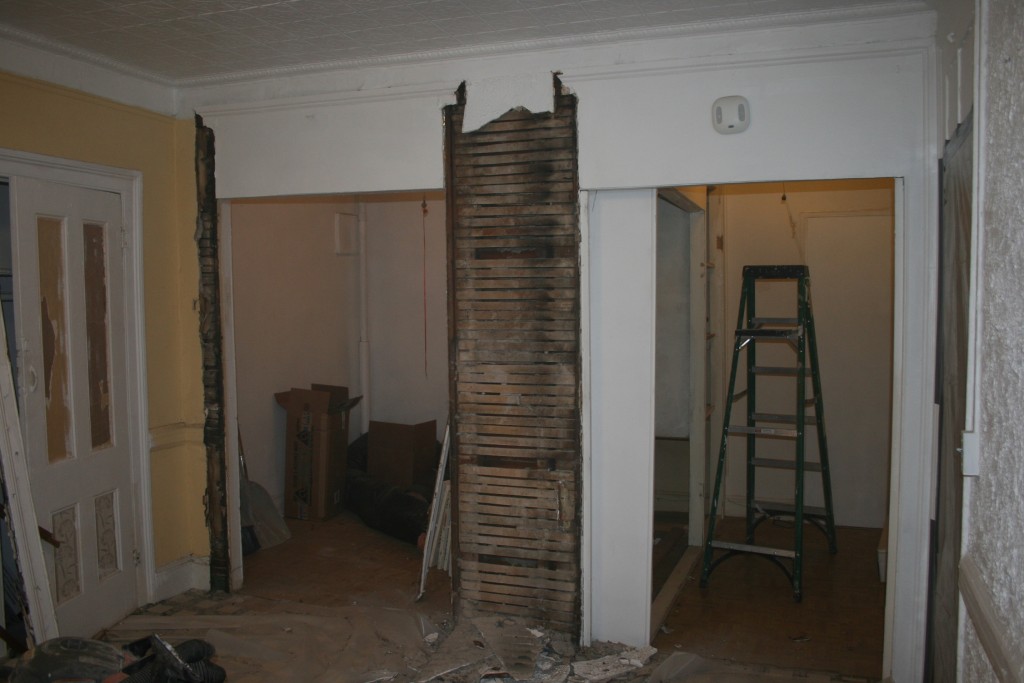 Here the entry way is seen clearly after it has been closed off. 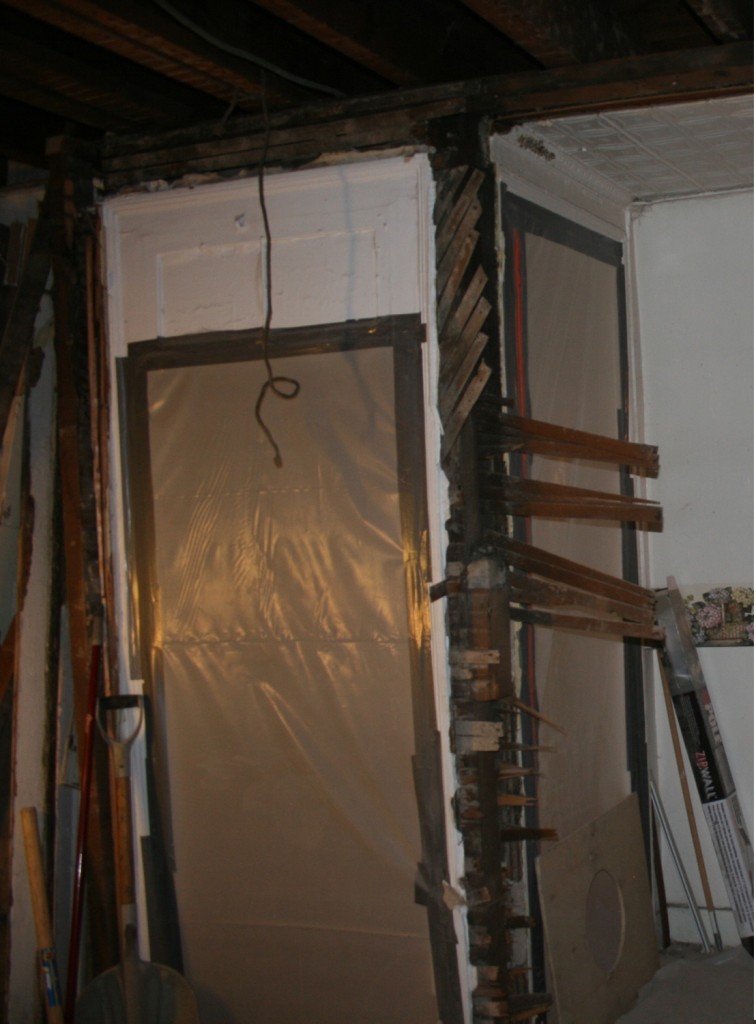 Here is a good shot of how the airlock was working, fully revealed after the interior wall had been taken down. 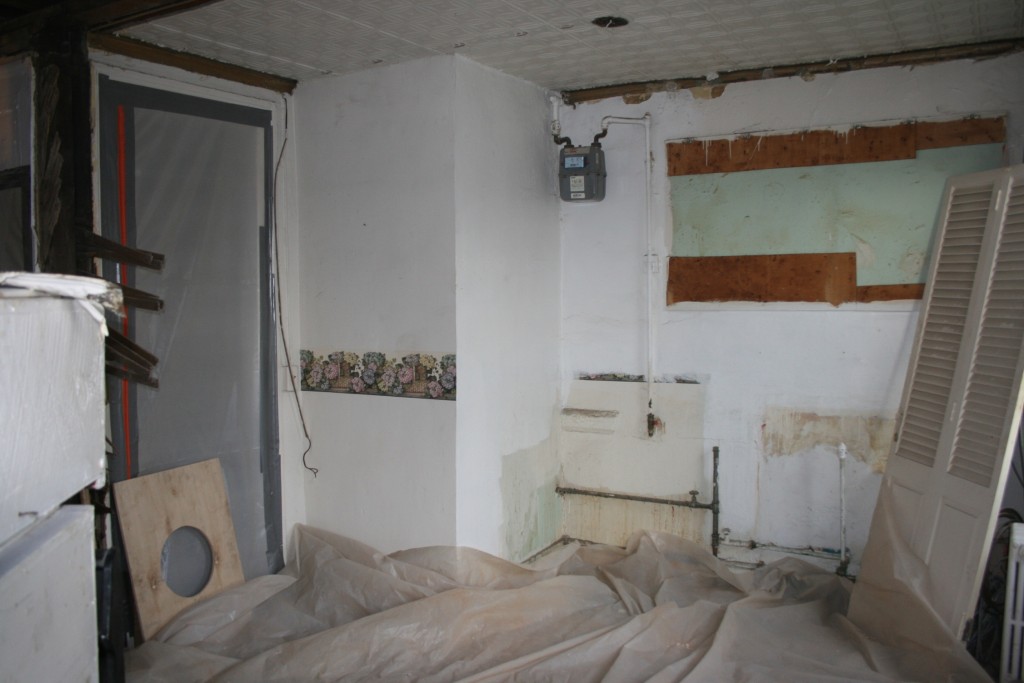 This shot shows clearly the orange zipper of the plastic zipper wall that allowed us to get in and out of the apartment.

This air filter could remove any particulate dust that we could create from the air in this apartment.  The more dust you knocked down the longer it took to sweep the air.  Sometimes after knocking a portion of wall or ceiling down, we would step out for ten minutes to let the air filter clean things up for us.  We still need to wear breathing filter to protect out lungs, but a least enough dust was removed that we could see clearly.  The filter exhausts clean air, but needs to be vented to an outside space to keep the air pressure pulling air in from the entryway door.  Below you’ll see big blue. 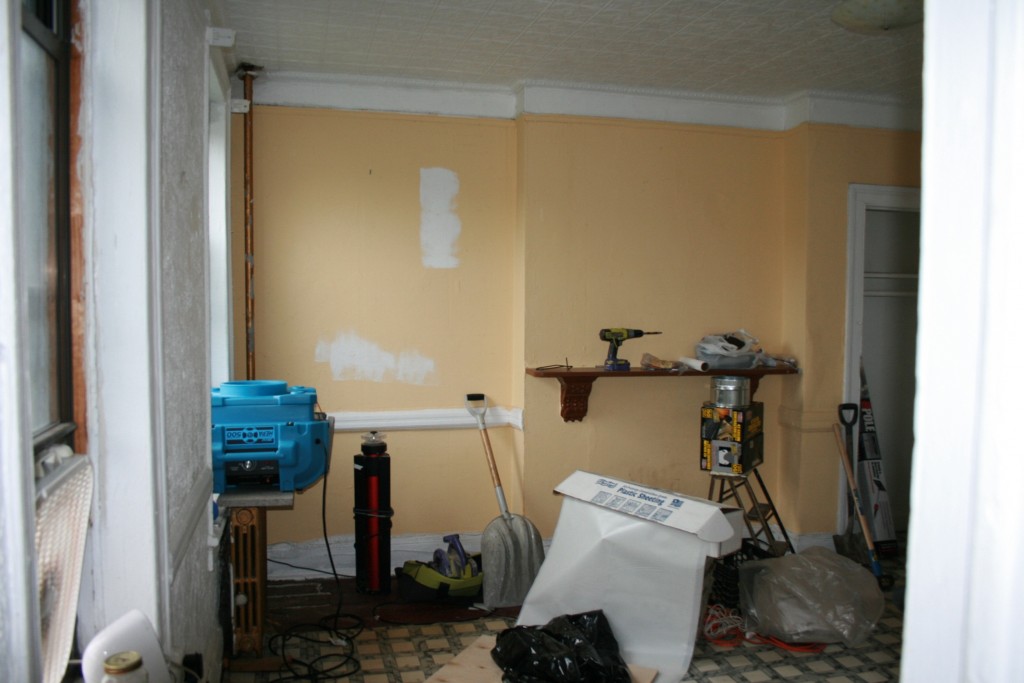 This large volume HEPA air filter was the key to keep dust from going out to the exterior of the building, and at the same time making the air breathable while we worked in this space. 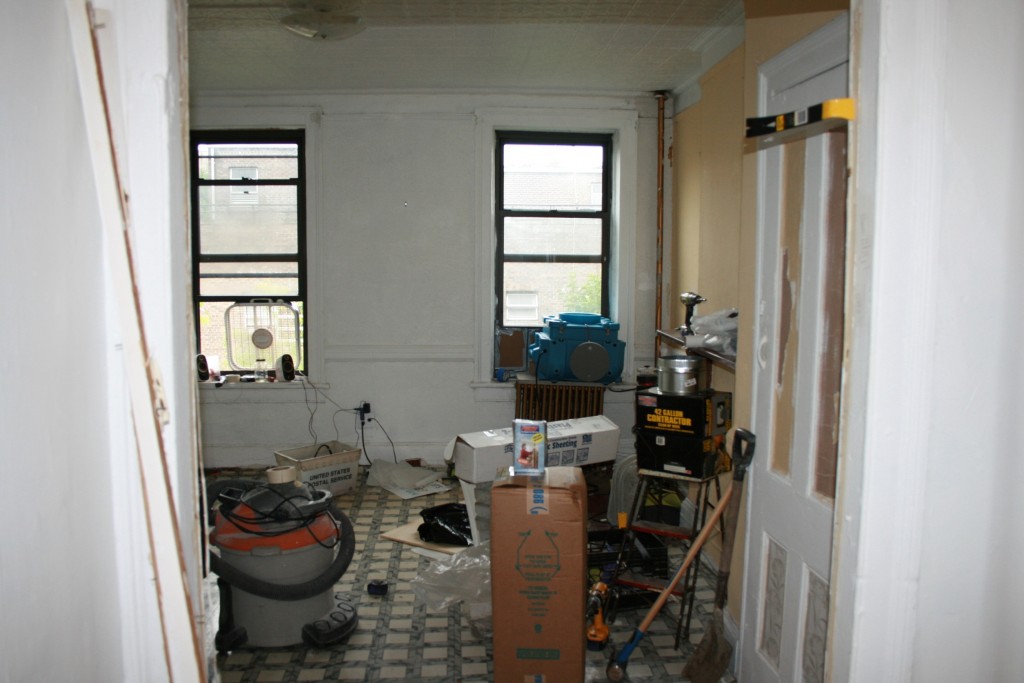 Early on we had the filter mounted right at the window. 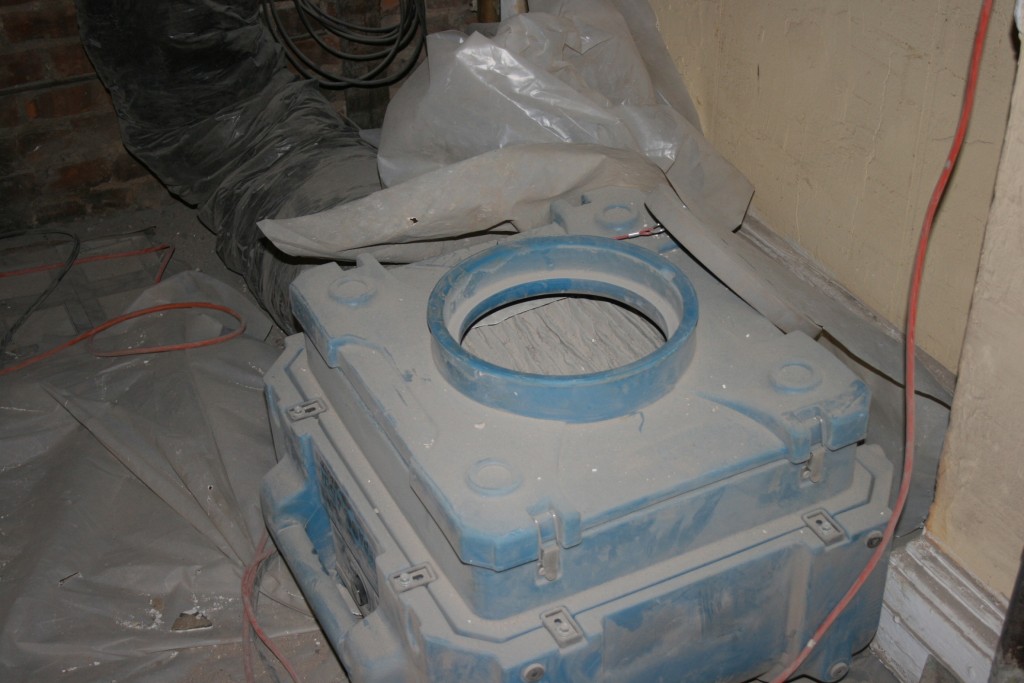 Once we had to start moving it around, the air filter was fit with an exhaust tube. We still wore masks, but the air filter brought dust levels down to a manageable level.