I have way more experience, proportionally, retro-fitting and refurbishing existing structures, than working new construction.  Which is fine by me.  New construction is easier, and I’m not at all opposed to it.  Retro-fitting, however, forces you to learn, research, or create ‘tricks’ to get stuff done within the constraints of the existing structure.  I have allot of tools and tricks in my arsenal as a result. Here is an electrical project in annoying walls, a retro-fit of a very modest kitchenette into nice kitchen/dining room. 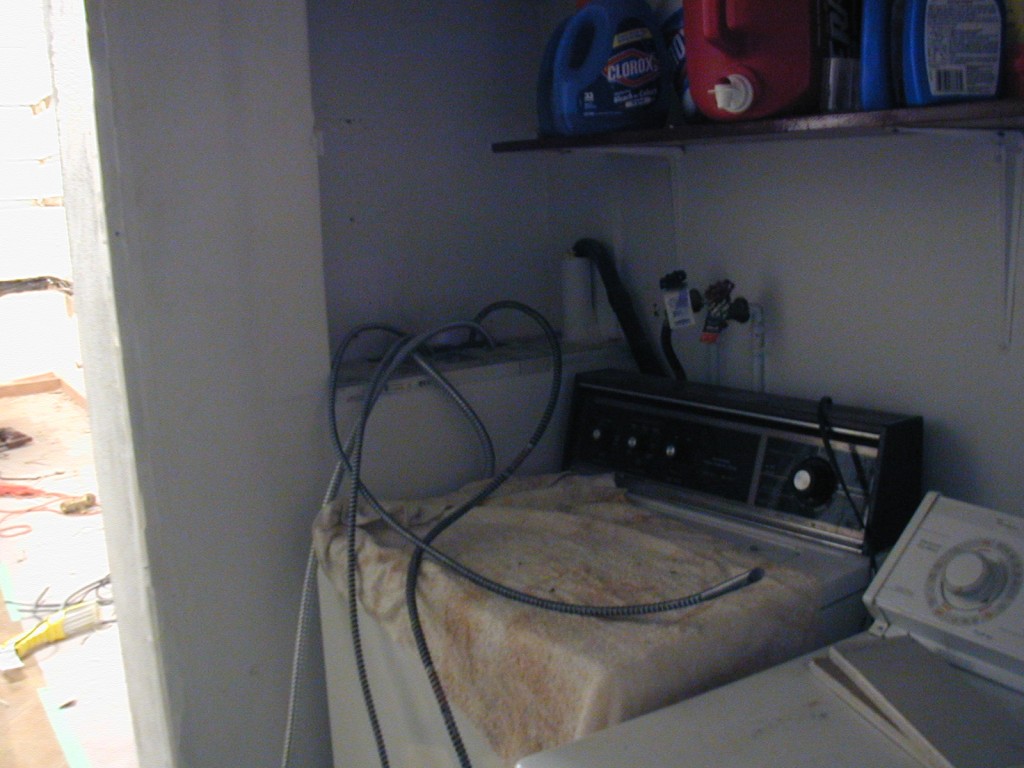 Here we have the new power lines coming up from the basement, one being a new line for the washer and dryer. 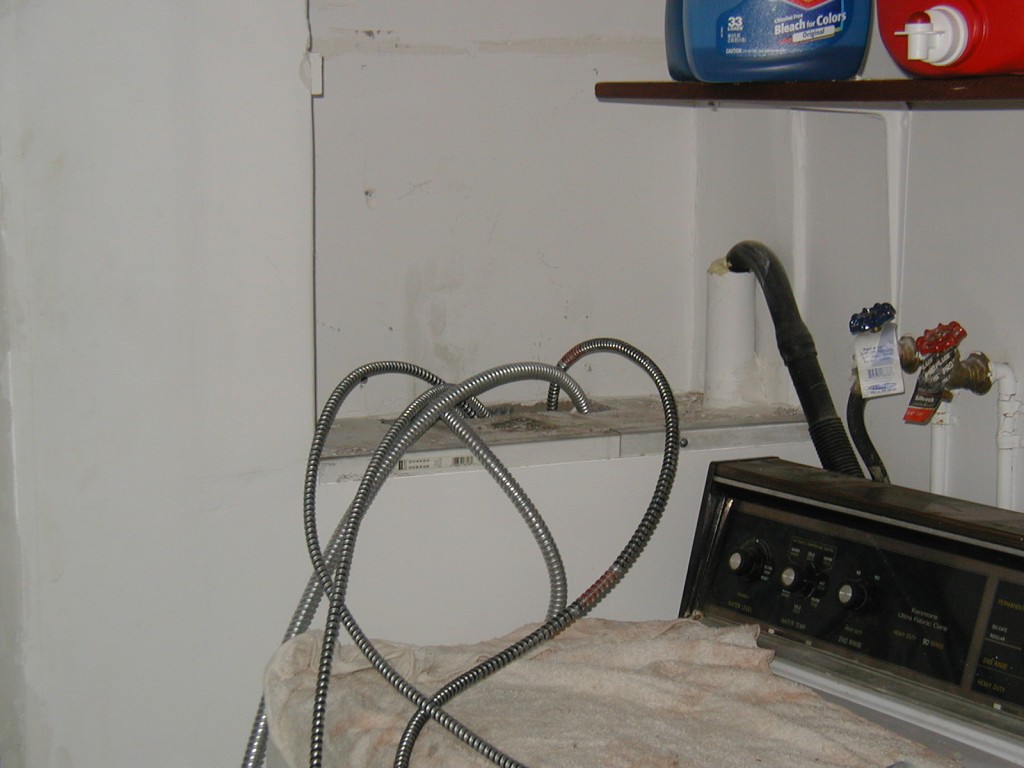 When I first opened this wall I thought, “Oh no, what have I gotten myself into.  Can I really get new cables and circuits into this wall?”  It was so shallow, and the wall behind it was some kind of crumbly stone.  About half of the rooms was going to get cabinets and a counter-top, which requires a bunch of outlets above it.  I also needed power for the refrigerator and a dedicated line for an 208/240 air conditioner.  Ultimately the solution was to forgo any thought of being able to put sheet-rock over my electrical lines.  Instead the trench would have to, in large part, be filled in with plaster after I was done. 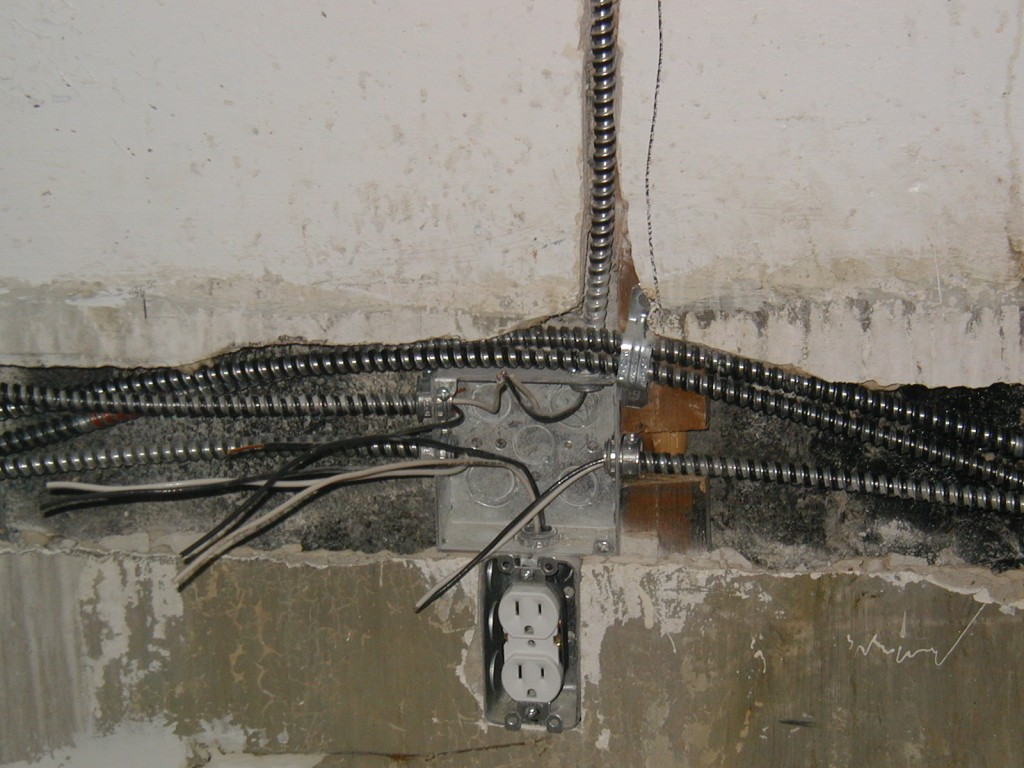 The wall was different in different parts.  Some was old sheet-rock, some was plaster.  I’ve noticed that allot of these old buildings in NYC have something other than bricks on the basement or ground level walls.  Luckily, as you can see above, I didn’t end up needing to channel into the stone in order to get an electrical box into the wall with out being above the level of the finished walls.  The pieces of wood in the wall were really thin, but I was able to anchor my cables to them securely.  Predominantly, the electrical boxes were mounted right to the stone wall. 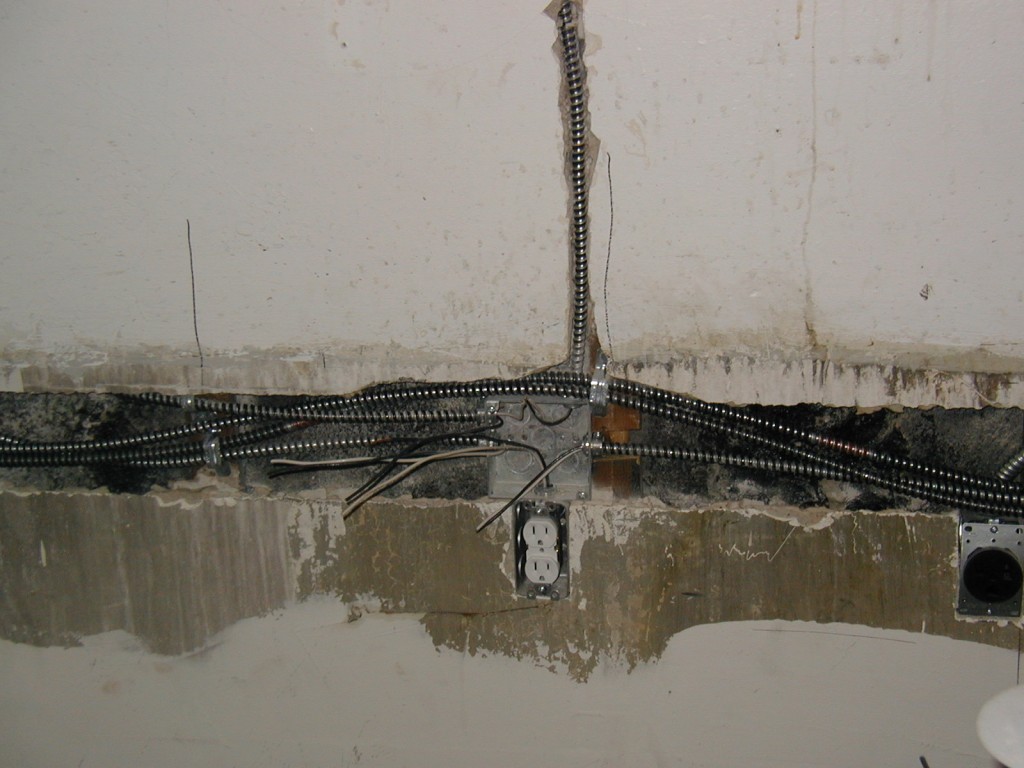 To the very right of this picture you see a special outlet for an electric range. 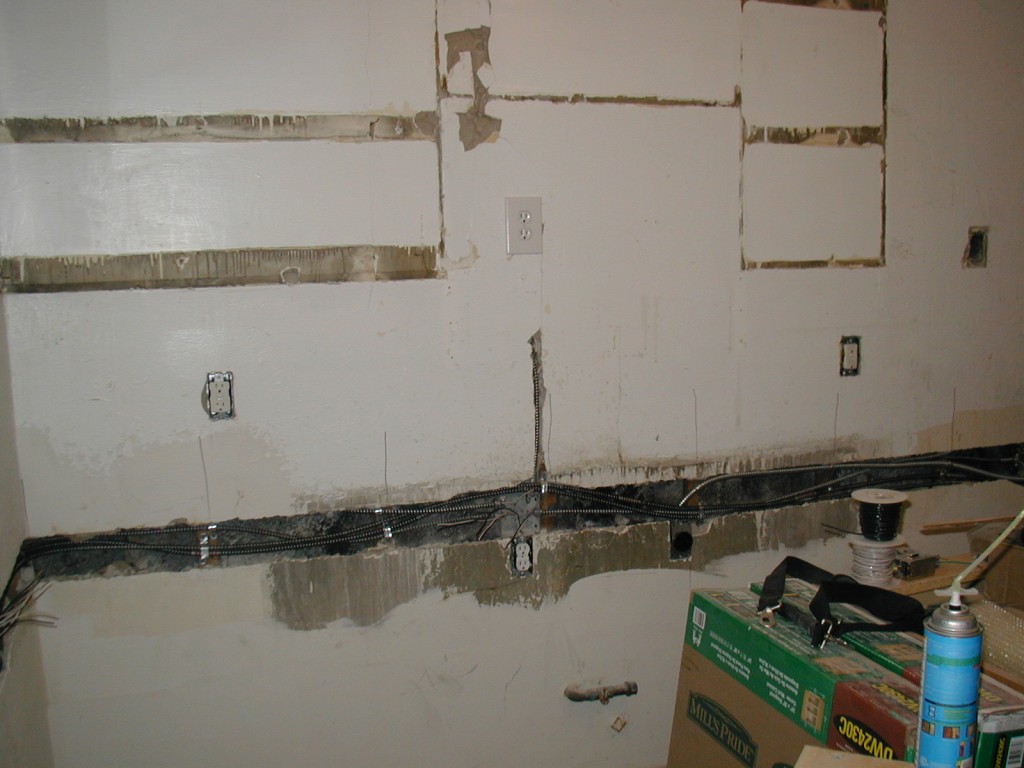 In this case we only put in the special outlet for future needs. As you can see there is a gas tap here, but on the off chance that some one dwelling here in the future might want an electric range instead, we put the special outlet in while we were rewiring anyway. 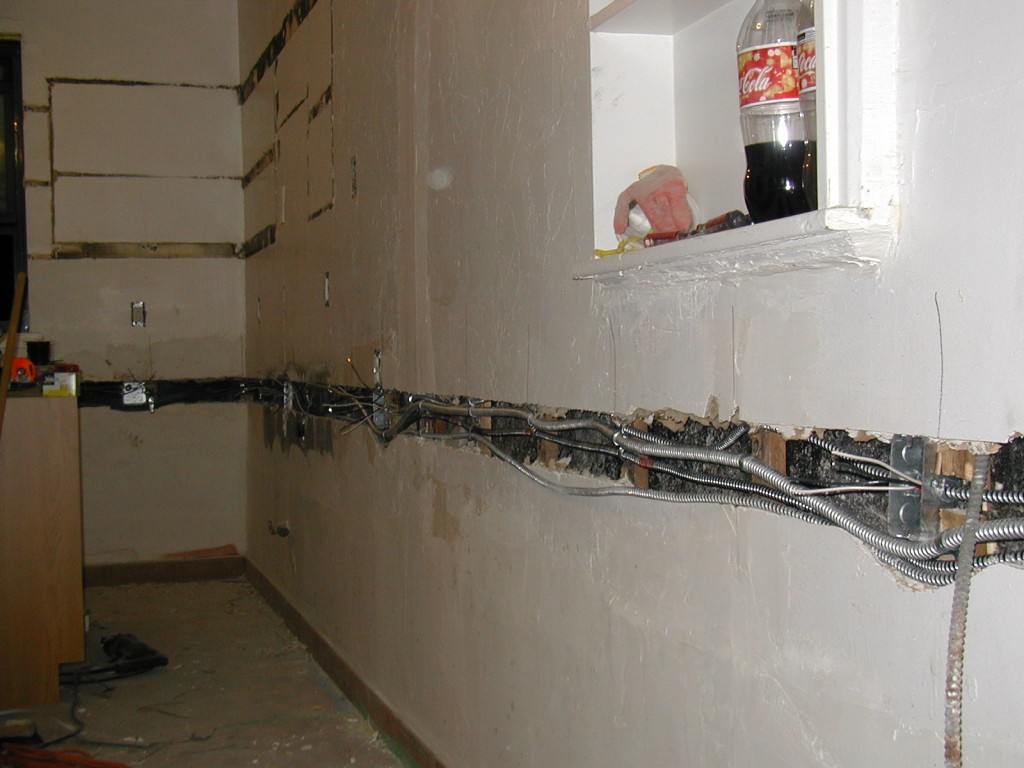 This is a long shot of what we have been looking at over the last few pictures. 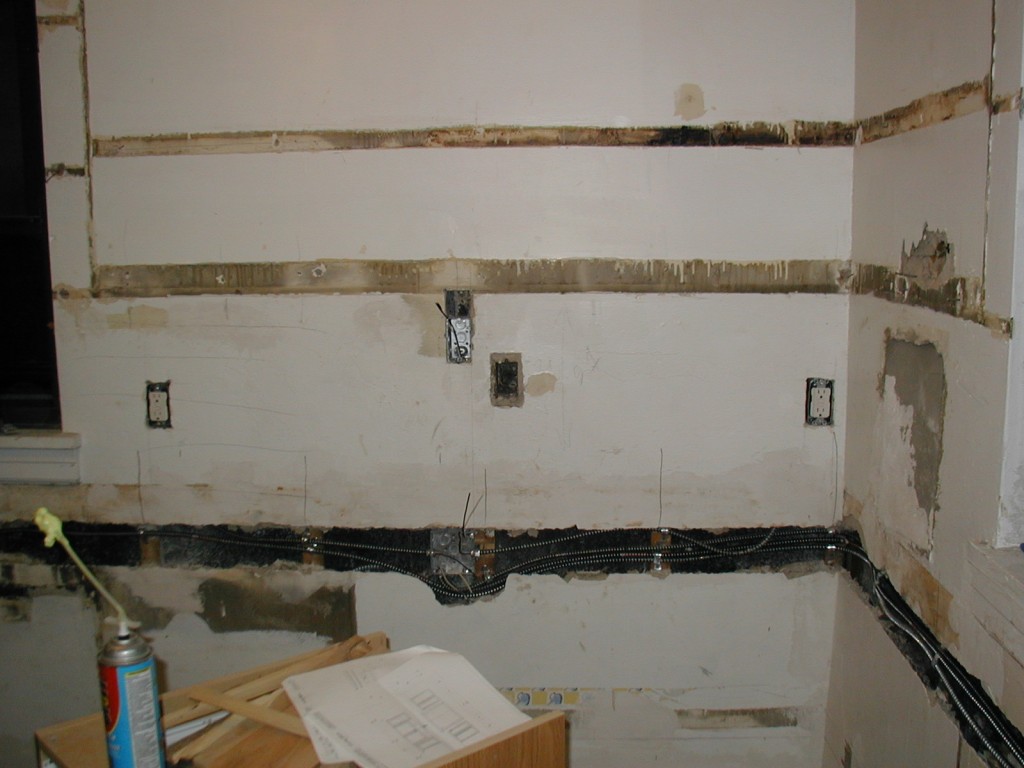 You’ll notice here another outlet box that is obviously lover than the level of where the counters are going to be. This box with the switch box above it, supplied the power a switch to the in sink garbage disposal. 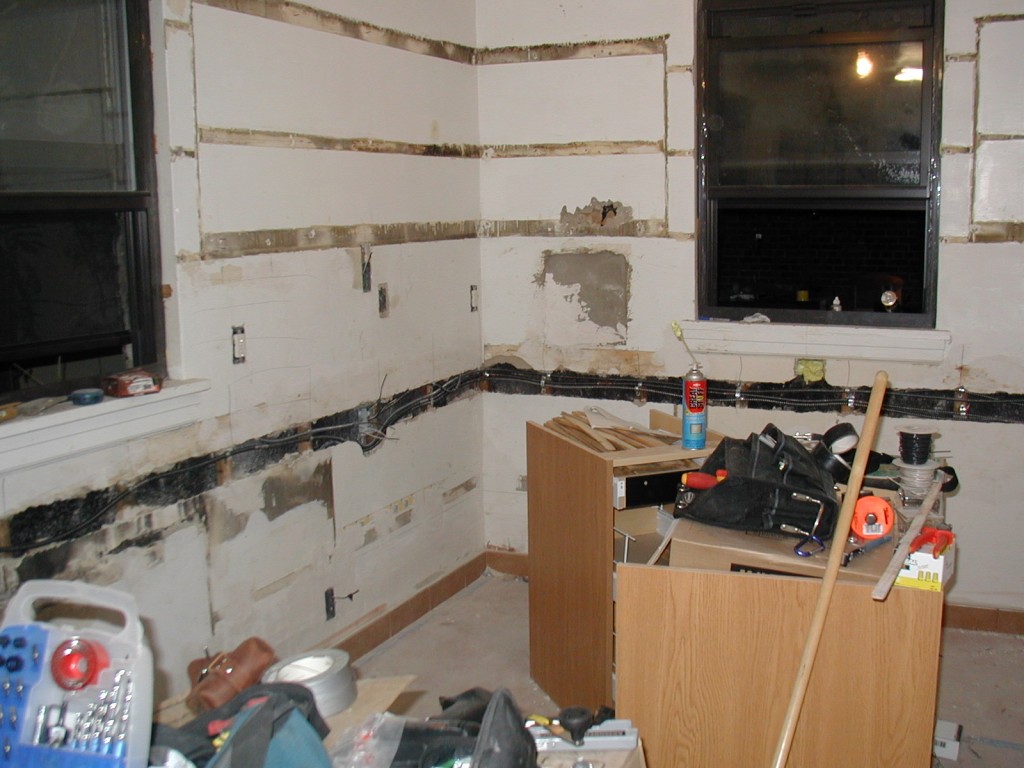 A final shot as to how I brought the power to this room through one channel.